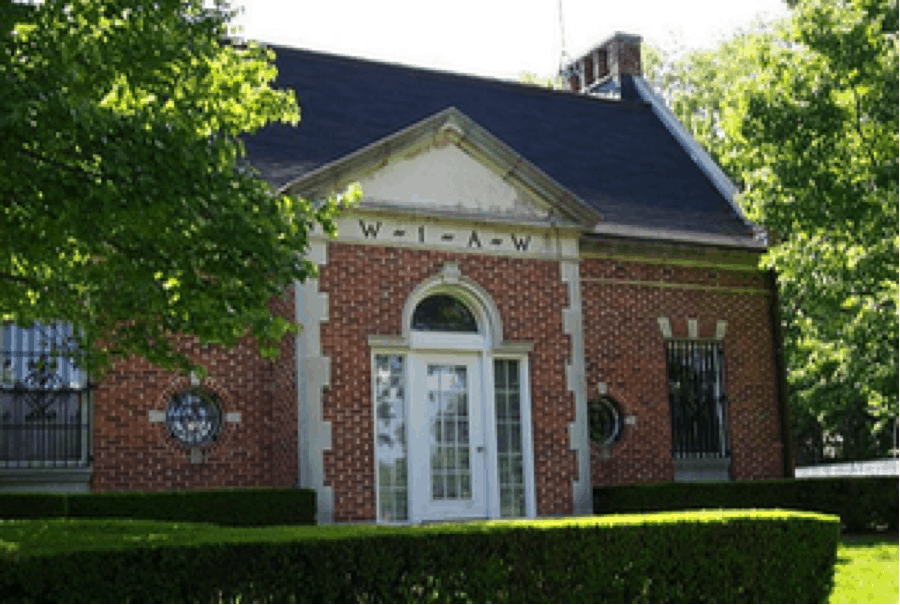 All avocations have their Mecca. For pilots, a visit to the Oshkosh fly-in is required; for race fans, the Indy 500 is a required pilgrimage. As a ham, we have two places that we must go to at least once in our ham radio journey. The first place is the Dayton hamfest, and second, the ARRL headquarters in Newington, CT. This is a story about my first visit to the ARRL HQ and the W1AW station back in 1999.

Ever since I became a ham, W1AW had a special meaning. After all, W1AW represents the ARRL–our national amateur radio organization. The politics of it aside, the ARRL headquarters holds a special place in the lore of amateur radio. The place exudes ham radio history. As you drive down Main Street in Newington (a suburb of Hartford, CT), you go from a small downtown into what appears to be a residential area of town. Then just as you start to think you are lost, you see them: towers! The brick building along Main Street which houses W1AW is the first sign of something familiar to hams everywhere. Then, a look further down the street reveals a large, two-story building which houses the ARRL offices.

Turning into the parking lot you see the requisite antennas on the vehicles, the ham license plates, and the omnipresent towers of W1AW. On this day, I arrived at about Noon for the tour of the building. After a quick tour of the amateur radio museum complete with equipment from all eras of amateur radio, someone came out to give me the tour of the office building. The building, constructed in the early 1970s, is a Spartan building with the look and feel of any office building. But in this building, there is one major difference: While most buildings like this usually house insurance companies or mortgage companies, this one is 100% dedicated to amateur radio. As I went through the many departments I kept thinking how luck these people were to make their living supporting a hobby. One interesting observation came when I stopped by the contest desk. On the wall, there is a standard business looking chart. Only instead of sales forecasts or new client data, this one had a graph of contest entries by year. To see a chart that we associate with typical “business” functions used to display something that we choose to do on the weekends was indeed enlightening. It shows that support of our hobby on this level is really treated by the men and women of the ARRL as a serious profession.

Another area I visited was the ARRL Lab. I now know why the projects in QST and the handbook look so good. Besides all the electronic test equipment, they have a full machine shop for fabrication of parts. I saw table saws and the like in the lab. So, the next time you tackle a project in QST and it does not look quite as good as it does in the picture, do not feel bad. They really have the equipment to do things right. Just beside the lab is an RF screen room where the reviews that appear in QST can be seen. On this day, surrounded by amazing test equipment was an ICOM IC706MKIIG radio going through the paces (remember this was 1999). Based on all the equipment here, the lab can really perform through tests of the equipment and provide proper recommendations on just how well equipment performs in the real world.

I continued my tour with a walk through the publishing sections of the ARRL. The ARRL really is a membership organization and a book publisher. At the time of my visit, they had just as much space dedicated to publishing QST and books as they do dedicated to other member services. Interestingly enough while I saw PCs most everywhere, I could tell when I entered the publishing side because I started to see Macintoshes on the desks (frequently used by the publishing industry).

My final stop was the ARRL-VEC area and the outgoing DX bureau. The most notable thing about the VEC was that all the test material is in a locked cage just to make sure the tests are not compromised. The DX bureau, as you would expect, had QSL cards everywhere. That completed my tour of the office side of things. The final stop on this day was the W1AW station across the parking lot.

As I went into the building, I noticed the lobby has a brief history of the station. You can see pictures of the various stages of the building. The layout of the station is quite impressive. When you walk into the area, you notice a large console in the middle, which houses some computers and audio equipment. Behind that desk is an environmentally controlled area that houses the W1AW transmitters used for HF bulletins and code practice. The gear during my visit was Harris commercial HF equipment and Harris one kilowatt amplifiers. There were only two pieces of equipment that look like normal ham gear: a Ten-Tec HF radio for 20 meters along with a Command Technologies amplifier. When these stations operate on all bands on CW, it is really interesting to see all the LED power meters on the HF rigs sending code in unison. The next area to see was the operating “studios”. There are three studios: one houses packet and satellite equipment, one had some HF equipment and the last has more HF equipment. The major manufacturers frequently donate equipment to the station to ensure each is well represented at W1AW. After the tour and showing my license to the operator at the station, I sat down to operate a Yaesu FT1000D on the 20-meter beam at 120 feet. I turned the rotor to the West to see what was on the band but propagation did not seem particularly good this day, but that would soon prove deceiving. I put out a simple CQ on 14.260 MHz USB and that is where I sat for the next 2 ½ hours. If you have ever heard W1AW on the air, you know the station attracts quite a following. Many people said this was the first time they had spoken to W1AW. I really did not make a contest out of it, choosing more to rag chew with people. I spoke to quite a few mobile stations including a truck driver in Kentucky running 1000 watts mobile–he really was the loudest signal on the band. As I logged each entry in the log, I reflected on my own attempts to work W1AW back when I fix started. It was the ham radio version of a celebrity call sign. I recalled being very happy to put the station in my log. On the other end, there was a guest op visiting the W1AW having just as much fun as I was having now. Towards the end of my operating time, I turned the beam towards Europe and heard a few pile-ups. One Russian station was on and I simple gave my call as “Whiskey One Alpha Whiskey. He came back to me and we exchanged information. When he came back to me, he said “W1AW…Is this the ARRL?” This goes to show the notability that the ARRL and the W1AW call sign have in the world. After my time at the microphone, it was time to close up, as they had to get the stations on the air for code practice. I completed my log sheets, submitted them to the operator and hung around for a bit while the code practice was played. I then took a stroll outside to see the steel trees outside. W1AW had four towers at the time. The tallest one was 120 feet with at least 8 Yagi antennas on it. There were a few 65-foot towers with various HF antennas. Another tower has the satellite antennas on it as well.

All in all, this is quite the place. I thank each and every person at the ARRL for his or her assistance and for the work they do. I recommend every ham make the trip to Newington at least once and see this amazing place. If you are not yet a member of the ARRL, I encourage you to join to support this organization. Their advocacy of amateur radio ensures it will continue for another century. They really do so much work that makes our hobby possible.