We Pounded in Ground Rods then got Smart

Sparky (a.k.a. Kyle, N4NSS) is always a big help with projects around the shack. Recently, Kyle and I completed some antenna work. However, still on the list of things to finish was a ground system around the house for proper lightning protection. I planned on using a number of ground rods right outside where the bulk head single-point-ground comes through the window (see my article in the last Spark Gap). With that in mind we started pounding in 8 foot copper clad ground rods (thank you Home Depot).

Needless to say, we took turns pounding the rods into the sand with a 10 lb sledge hammer. Kyle would pound for a while and I would hold the rod with long pliers. Then it was my turn to pound. After 3 or four rods we were about to abort our plans and go for a much smaller ground system than originally planned.

Not being happy with a so-so a ground system, the light-finally-dawned-on-marble-head, as they say. Home Depot rents all kinds of tools, so I went to look at jackhammers (big impact drivers). I started with the size 27 demolition hammer which had an attractive rental price. Yes, the hammer weighs 27 pounds. They seem to size them by weight. The rental person said that would not work. The reason is because it did not have the tool-end to put in the hammer for ground rods. I had thought I could just stick the rod in the hammer’s chuck, a “no-go” on that idea.

Eventually we found the next size up, a “Small Breaker,” Makita HM1307CB Demolition Hammer with a powerful 14.0 -amp motor (yes 35 pounds to balance up in the air on an 8 ft rod, while wildly vibrating!). This hammer had the perfect tool-end, cup shaped to fit over the rod. If you rent one of these puppies, also rent the long heavy gauge extension cord.

We took turns at the jack hammer with one of us on the ground and the other on the ladder. We would both hold the hammer while the rod was going in. It was not too difficult to hold and only took 2-3 minutes for each rod. There are now a total of 11 ground rods that encircle the house with #6 copper wire between all the rods except the main 4 rods at the bulkhead single point ground that are strapped together underground.

We were glad we used the 35 lb hammer because it seemed that at 4 ft down, wherever we placed a rod there was a tough layer we had to break through. We actually put a good deal of our weight on the hammer to get past that point. Otherwise, the sand only required the weight of the hammer which went quickly.

Ground ohm measurements were taken by using a clamp-on ground resistance measuring instrument. The device gave measurements close to 0.5 ohms to ground at all the important locations, which is considered a good ground. I used the AEMC unit, which was borrowed from a friend.

The copper strapping and couplings are from Georgia Copper (www.gacopper.com) and were put together with Jet Lube SS-30. This grease is 70% copper dust. The grease prevents corrosion and the copper in SS-30 makes it very conductive. The idea is that trapped copper in the joints makes a very good contact between both metal surfaces (cleaned of oxide first) as the clamps are tightened down. As an alternative, Cadweld can be used in place of clamps and produces a permanent, exothermic connection to a ground rod (DX Engineering). It is a welded connection that thermally fuses the wire to the ground rod with copper. 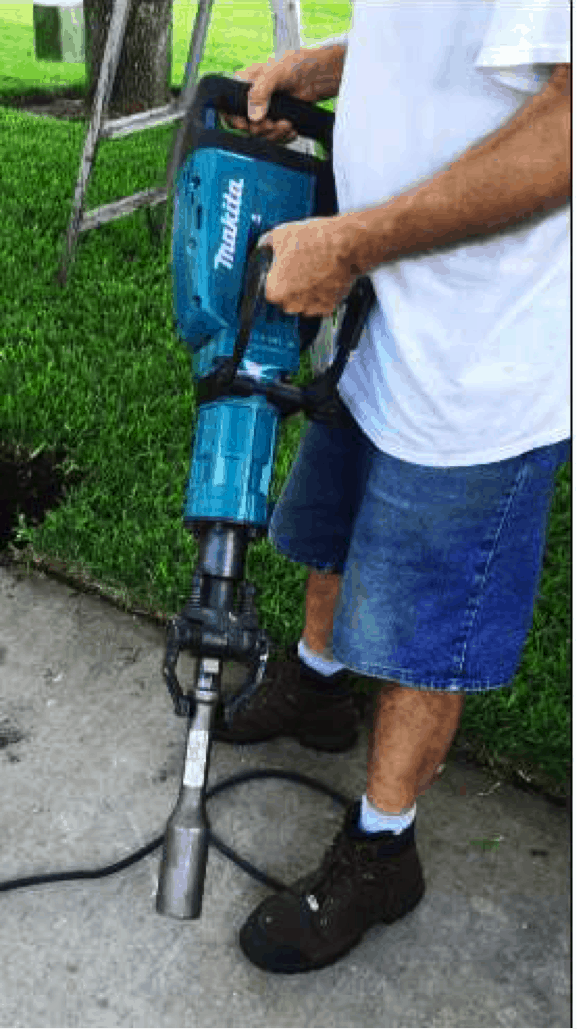